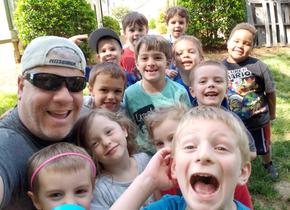 The Smart Way to Play!

Coach Dan's love of fitness began at a young age on the baseball field. Dan was a 4 year letter winner in basketball and baseball at Wheeling Central High School. During his basketball career Dan went to State Championships three times and won the  WV State Championship in 1990 as a standout guard. At Muskingham College, Dan continued his sports career playing baseball and later became an Assistant Coach at the college level. After his sports career, Dan spent 20 years  working with children with different abilities and special needs as a Therapeutic Program Director. Dan also coached baseball and basketball at Alexander Graham Middle School and through Parks and Rec. Dan always felt he could reach children through sports from a simple basketball game to a bike ride. He saw how much he could connect and help children to open up and gain new skills.

Coach Dan's motto is- it may look like just a simple cone- but it is more than just a cone.